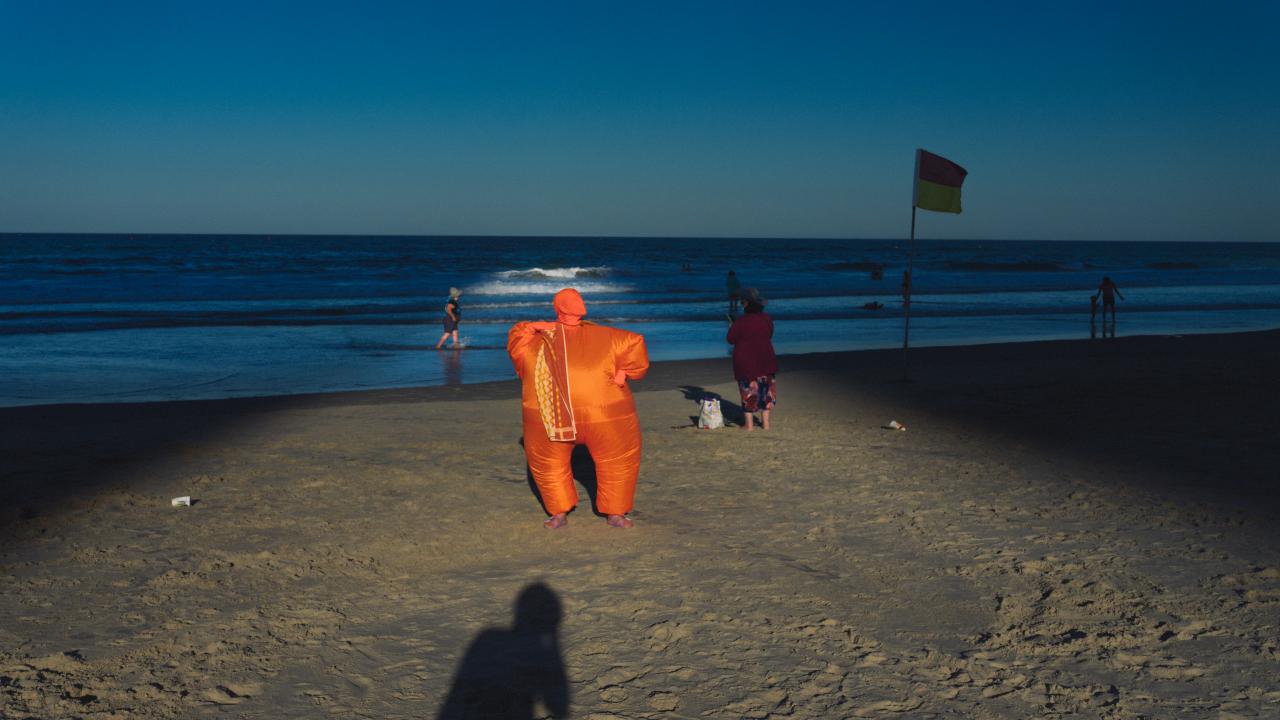 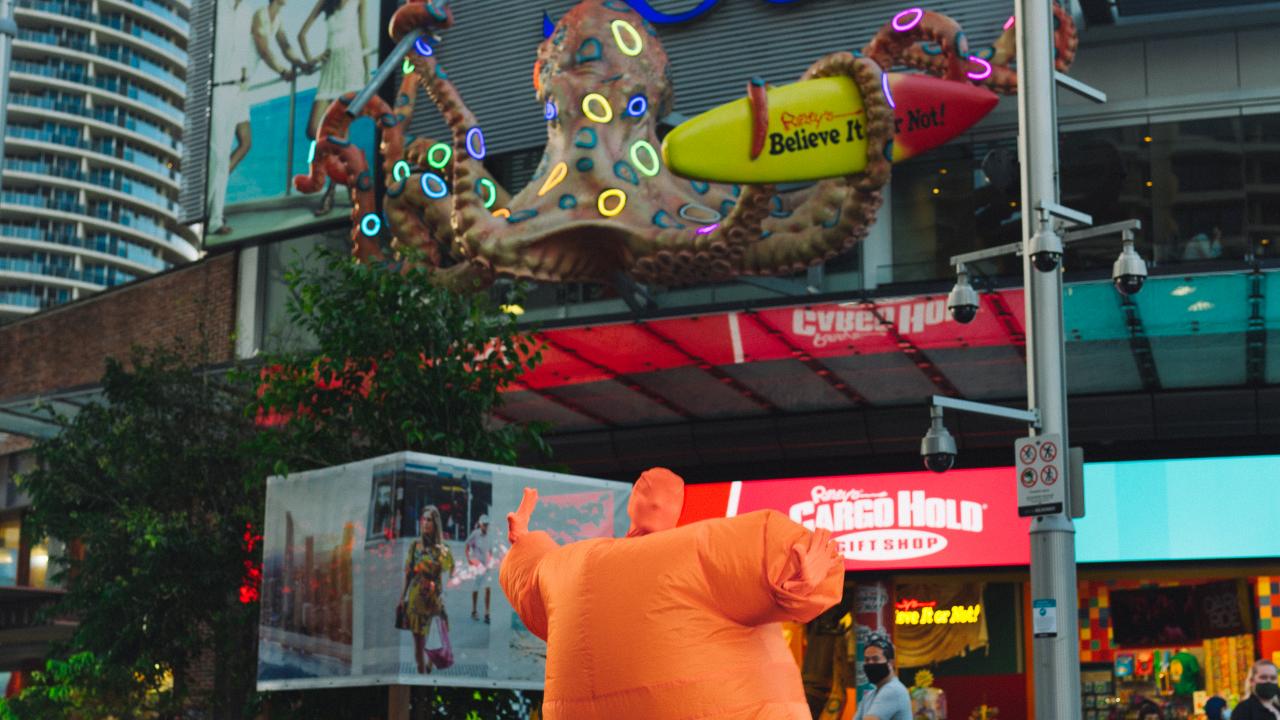 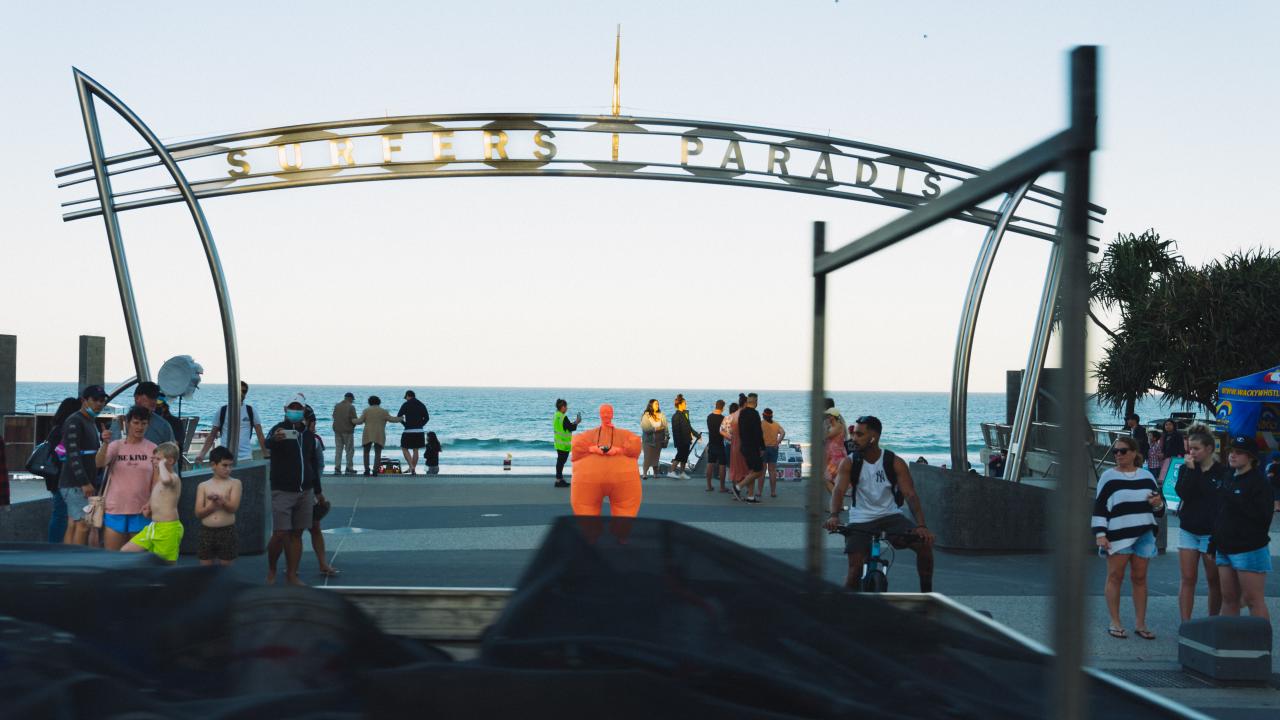 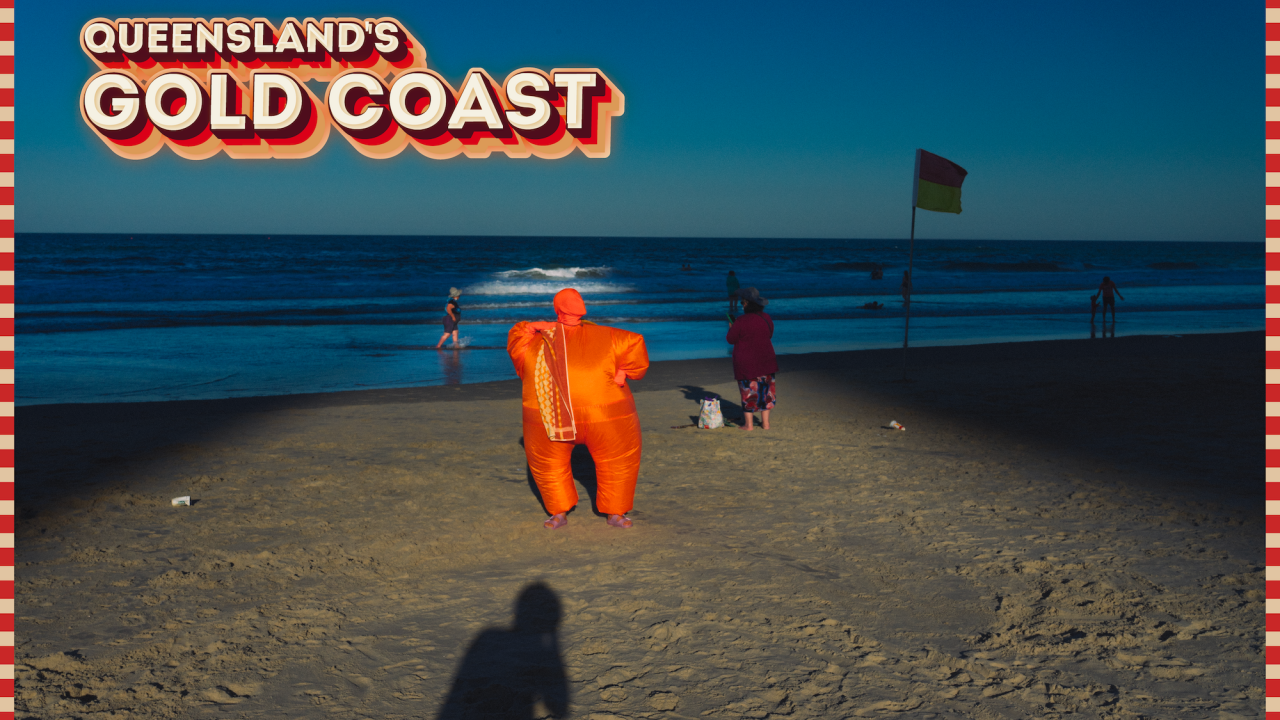 LOOKS LIKE A TOURIST builds on the beginnings of a new work titled ORANGEwhich was created in response to HOTA’s Rage Against The V(irus) and the Covid-19 pandemic, the work is an extension of this exploration into “otherness” through performance, choreographic and photography practices. A new work in development between participatory/performance artist Daniele Constance and photographer/videographer Jorge Serra.

ORANGE is quite literally an enormous, plastic, inflatable suit, worn by the artist. In its exuberance, visibility and mass, it becomes something other than a person. It is no one and every one.

LOOKS LIKE A TOURIST is an exploration into negotiating identity with reference to otherness; relationship to place and belonging. The work is about rewriting a narrative of disconnect from the romanticism of touristic adventures (being a tourist) to the disturbing and damaging effects tourists (and humans at large) have on our natural (and social) environments. The orange suit strives to create a position of cultural and demographic anonymity, allowing the artist to become a stranger, exploring some of the most iconic parts of the Gold Coast in a touristic and unencumbered way. It creates a liminal space for belonging and not belonging, while concurrently highlighting the inherent nature of tourism as a culture of estrangement and consumption.

The Gold Coast is a well known tourist destination. A city often narrowly described by the surf, sun, pleasure and leisure culture found on fold-out brochures. While it’s beautiful beaches and natural environments are what attracts visitors, the negative impacts of tourism development are gradually destroying the environmental resources on which it depends. Of course, this isn’t unique to the Gold Coast. There is extensive research demonstrating the enormous pressure tourism has on the environment. Leading to issues with increased pollution, waste, overuse of natural resources, natural habitat loss and increased pressure on endangered species. Of course, there are negative social and cultural impacts as well, including relocation of communities, destruction of heritage, increased racism, rapid changes in social and moral behaviours. It is the long term intention for this work to begin to address some of these issues, through humour, satire and visibly demonstrating the impacts of people, tourism development and urbanisation in our natural spaces.

The opportunity provided through MEDIUM RARE allowed for exploration and play, with the primary location being iconic tourist destination, Surfers Paradise. As the work is voyeuristic in nature, it created opportunities for audience engagement and participation. We discovered that the act of performing as a tourist in a public space, created a spectacle in itself with many genuine tourists taking photos of our activity. The artist/performance became its own tourist attraction.

LOOKS LIKE A TOURIST is also exploring the iconography of postcards, as they are in many ways the pinnacle of tourism – the trophy you take home. In a way, trying to reframe tourism and its legacy.

Daniele’s primary arts practice is embedded in performance, however, she utilises sound and audio all her works; from documentary style audio interviews to field recordings, site specific radio programs and live art installations.

JORGE SERRA is an artist working across photography, videography and visual arts practices. Originally from Portugal, I have worked across Europe, US, Asia and Australia. As a self-taught artist, curiosity has always led my learning process and over the past ten years I have accumulated technical knowledge and experience as a photographer across commercial and creative settings, to photojournalism and conceptual projects. I have worked with a multitude of people, from dancers to singers, activists, athletes, arts festivals and brands.

I am driven to capture moments and stories that shift perceptions about the mundane, the everyday, the unassuming. This also derives a pull to intervene and attempt to affect the fabric of the society we live in, through the lens of socially minded projects.

Since moving to the Gold Coast two years ago, I have allowed my practice to naturally develop and expand to include videography and film, text and sculpture. In 2020 I presented two new artistic works including photography series ‘Orange’ as part of HOTA’s Rage Against the V(irus), and ‘Sanctity of Space’ a new short film with Placemakers’ Behind the Golden Doors program. I was commissioned to photograph a portrait series for the Museum of Brisbane in collaboration with Daniele Constance, titled ‘From My Home To Yours’. I am currently developing a new film work ‘Lung Water’ in collaboration with Ruby Donohoe set for presentation at Horizon Festival in August, and recently was engaged in Supercell Festival of Contemporary Dance – SCAPE program for film works.

As part of SWELL Fringe Festival THE WALLS ART SPACE will present MEDIUM RARE; site-specific art and sculpture symposium: responding to the physical and psychological landscape, here and now. MEDIUM RARE is an initiative that supports artists to make and document contemporary artworks in the outdoors and other sites, in their own time and on their own terms. The symposium will showcase documentation of the artists projects and open up discussion about the landscape that we find ourselves in. SWELL SCULPTURE FESTIVAL is Queensland’s largest outdoor sculpture exhibition and takes place on Currumbin Beach from 10-19 September.